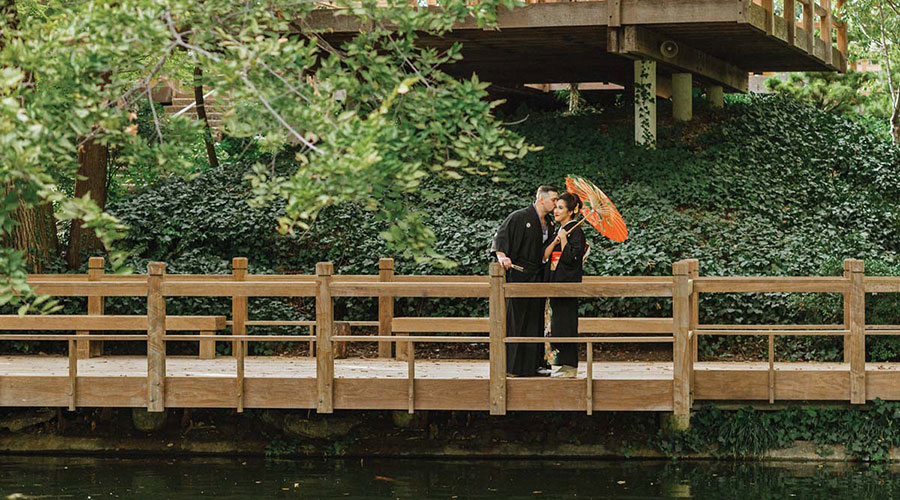 “I’ve always been very proud of being Japanese American. I knew I wanted to re-create their photo as a tribute to their love and to show respect to the Japanese wedding traditions.” — Jordan Yamada Huber

When Jordan Yamada was growing up, she always admired the wedding-day portrait of her Japanese grandparents, Yoshiko and William Yamada, dressed in kimonos. The couple met and married in 1949, when U.S.-born William was serving as an American solider stationed in Japan. So when Jordan’s grandparents gave her boyfriend, Tyler Huber, the kimono Jordan’s grandfather had worn on his wedding day, he was honored to be entrusted with the heirloom. And when Tyler and Jordan got engaged, she was inspired to re-create her grandparents’ wedding portrait some 70 years later, with Tyler wearing the vintage kimono. Although Yoshiko no longer had her kimono, a friend of hers in the Fort Worth Japanese Society, Haruko Herness, offered to dress Jordan — and suggested that the couple have their photo shoot at the Fort Worth Botanic Garden’s Japanese Garden. To complete the look, Jordan searched eBay for traditional hair accessories from Japan. 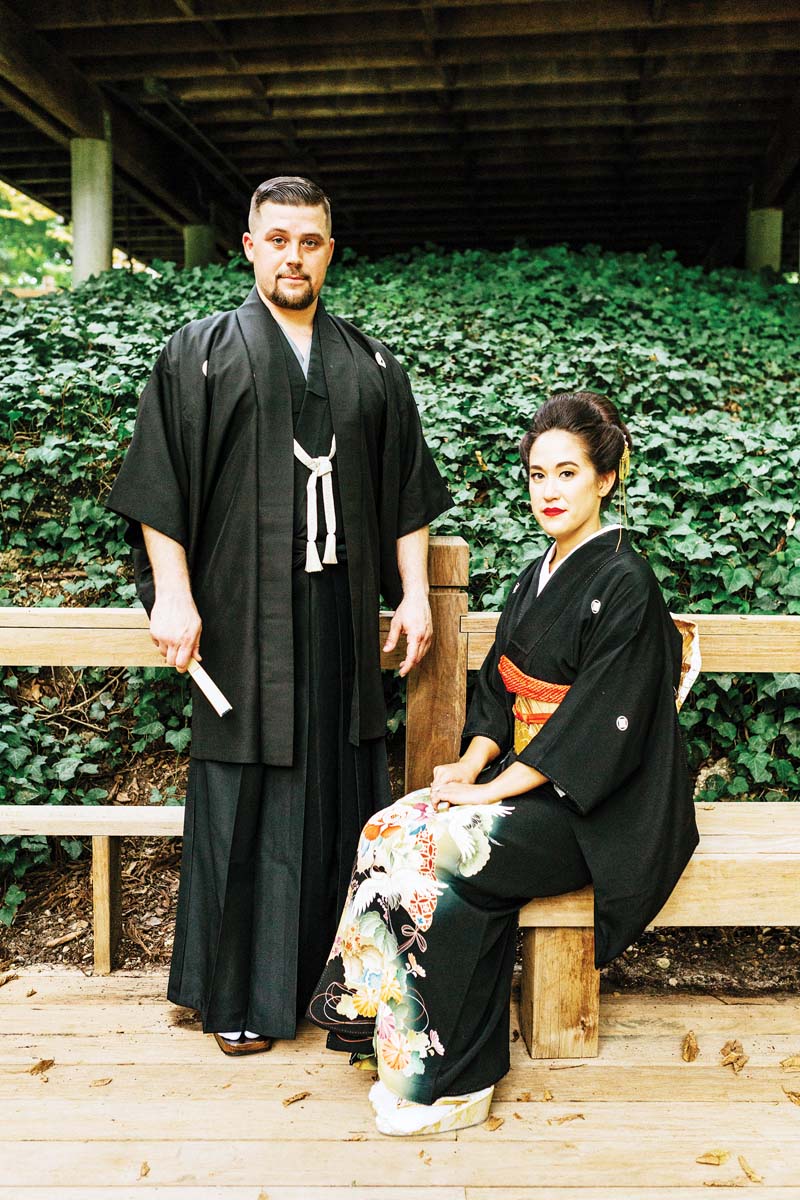 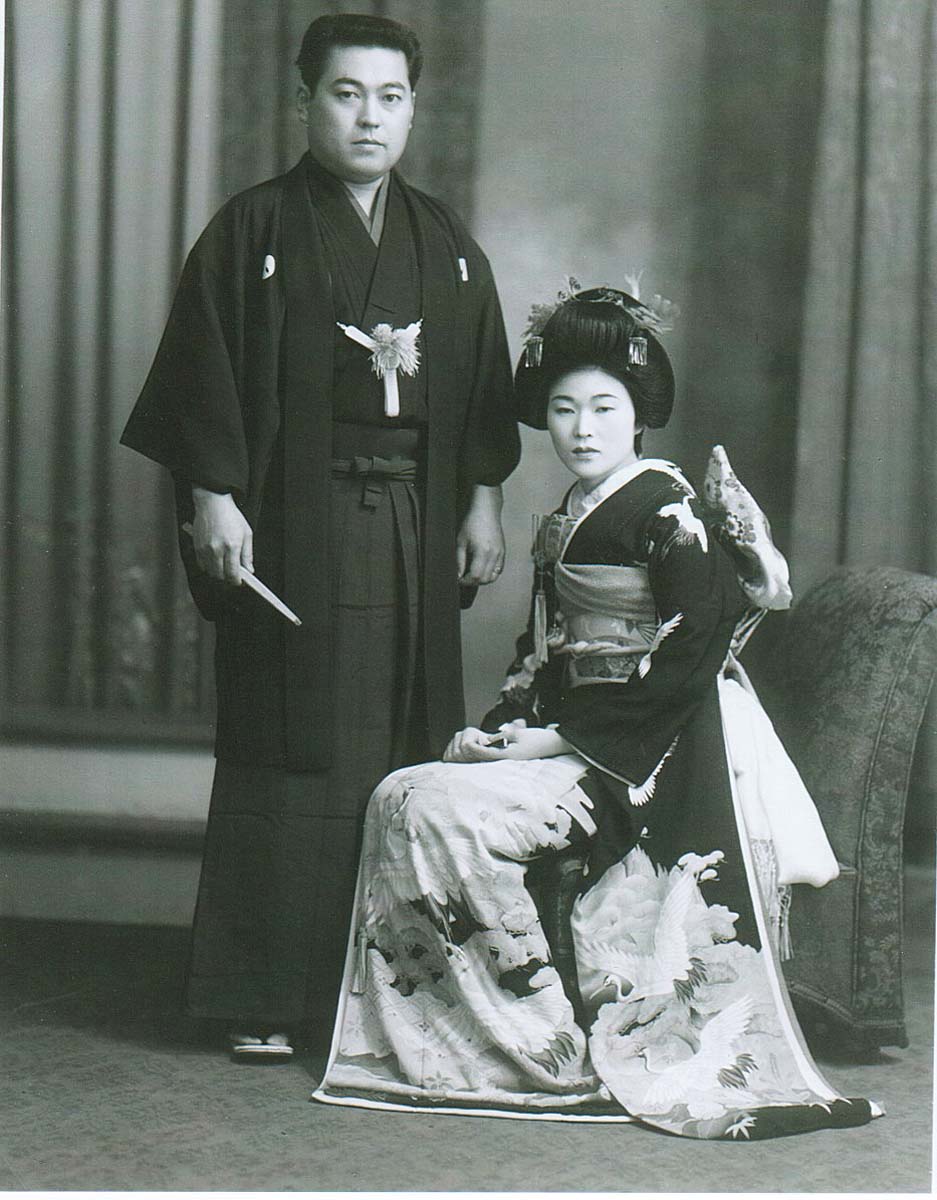 Yoshiko Idoguchi and William Minoru Yamada had their wedding portrait taken in 1949 in Kagoshima, Japan. 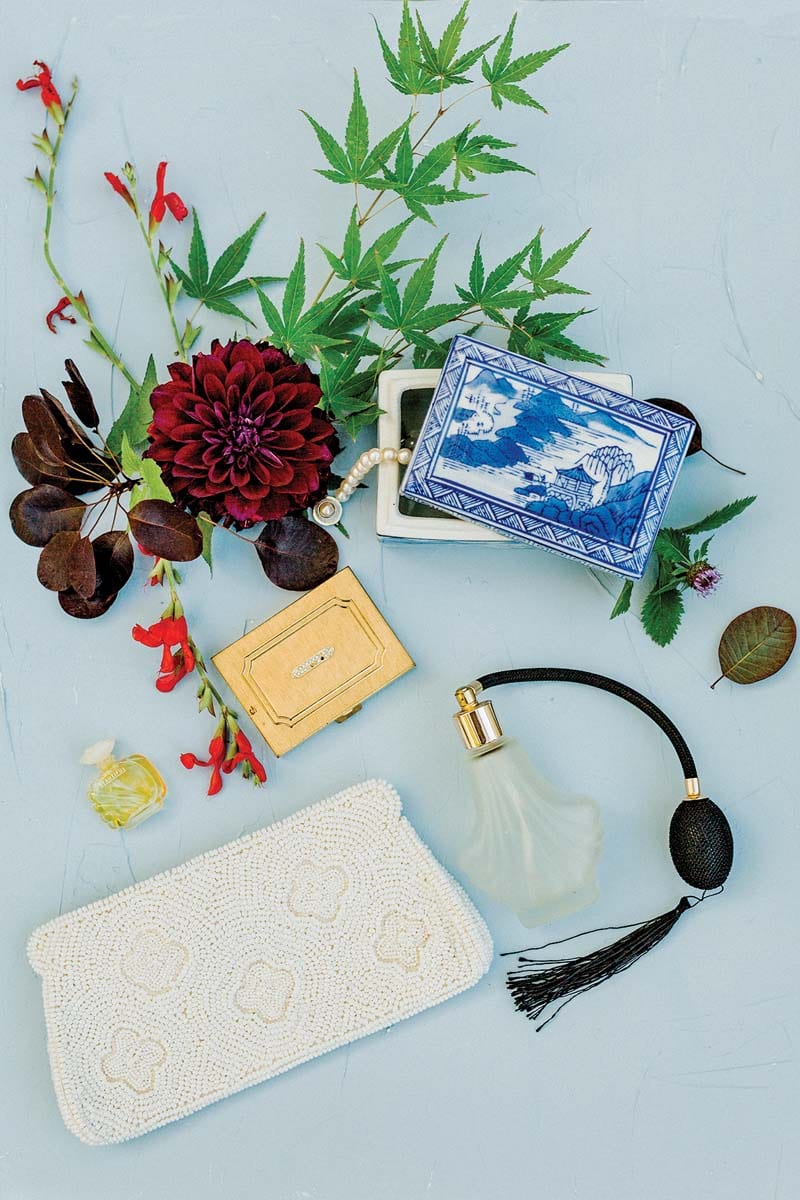 Jordan’s grandmother’s pearls were given to her by her husband on their wedding day. “That was the only day in her life that she wore them, and she cherished them a great deal,” says Jordan. “She let me wear them on my wedding day, along with using one of her beaded white purses.”

“I thought of the shoot as a once-in-a-lifetime opportunity. To be in full traditional dress, hair and makeup, this occasion would probably never present itself again in my life. It was really a dream come true,” says Jordan. “The next day, we went to return everything to Haruko and she graciously gifted me with the kimono I wore to keep as a memento of the special occasion.” It was on their wedding day a month later that Jordan and Tyler first shared their Japanese Garden portraits with family and friends, displaying a similarly styled one alongside her grandparents’ wedding photo. The old black-and-white image shows a couple whose marriage would span 67 years, until William’s death in 2017. Yoshiko lived long enough not only to witness Jordan and Tyler’s deep interest in her traditions, but also to celebrate their nuptials with them. She passed away in early 2020, her long love story ending just as her granddaughter’s has begun.