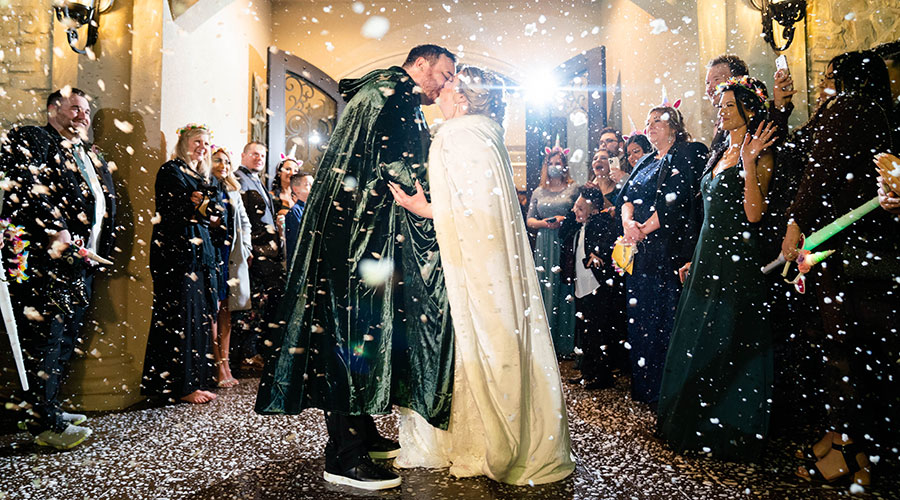 ALYSSA AND ALEX’S families have known each other for 50 years. They officially met at Alyssa’s graduation party from college when Alex’s family was invited to celebrate her achievement. It was love at first sight for Alex. After dating for 2 ½ years, Alex got the immediate family together for Alyssa’s early birthday dinner and asked her to marry him.

PLANNING DURING A PANDEMIC

They threw an engagement party in January of 2020 and hired their planner, Samantha Garrigan from A Stylish Soiree, in February. Then COVID-19 hit. It became a blessing and a curse. Some decisions were easier because of the restrictions, but planning was stressful because of the time crunch they ended up falling into because of shutdowns. Their guests consisted of a variety of points of views on the pandemic. They had to find a happy medium between health, safety, their guests’ desires, as well as their own. 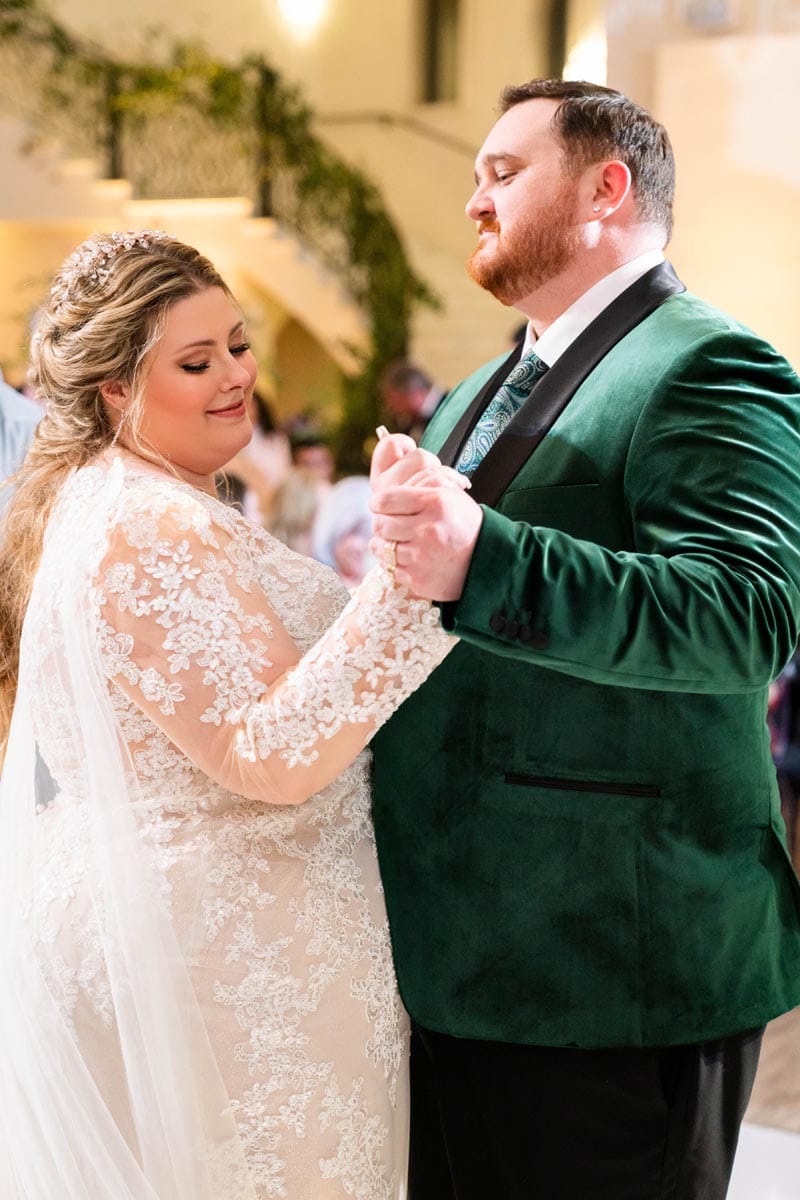 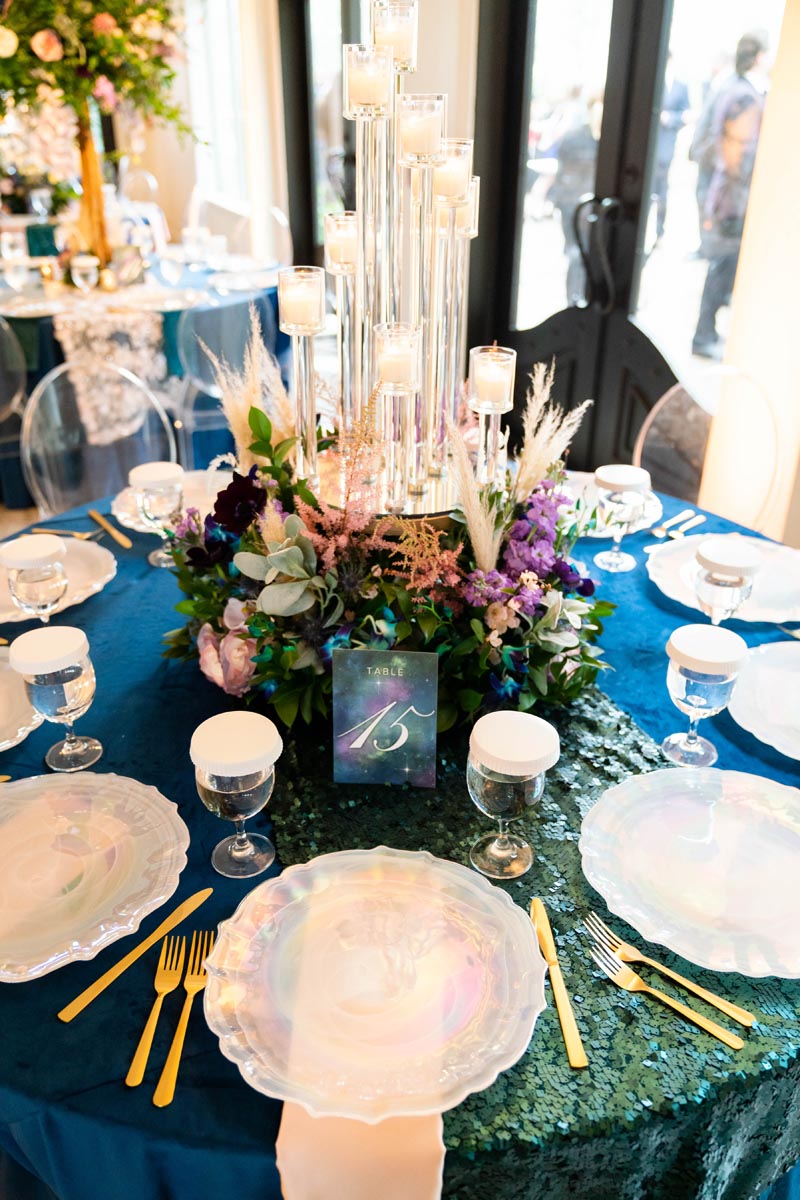 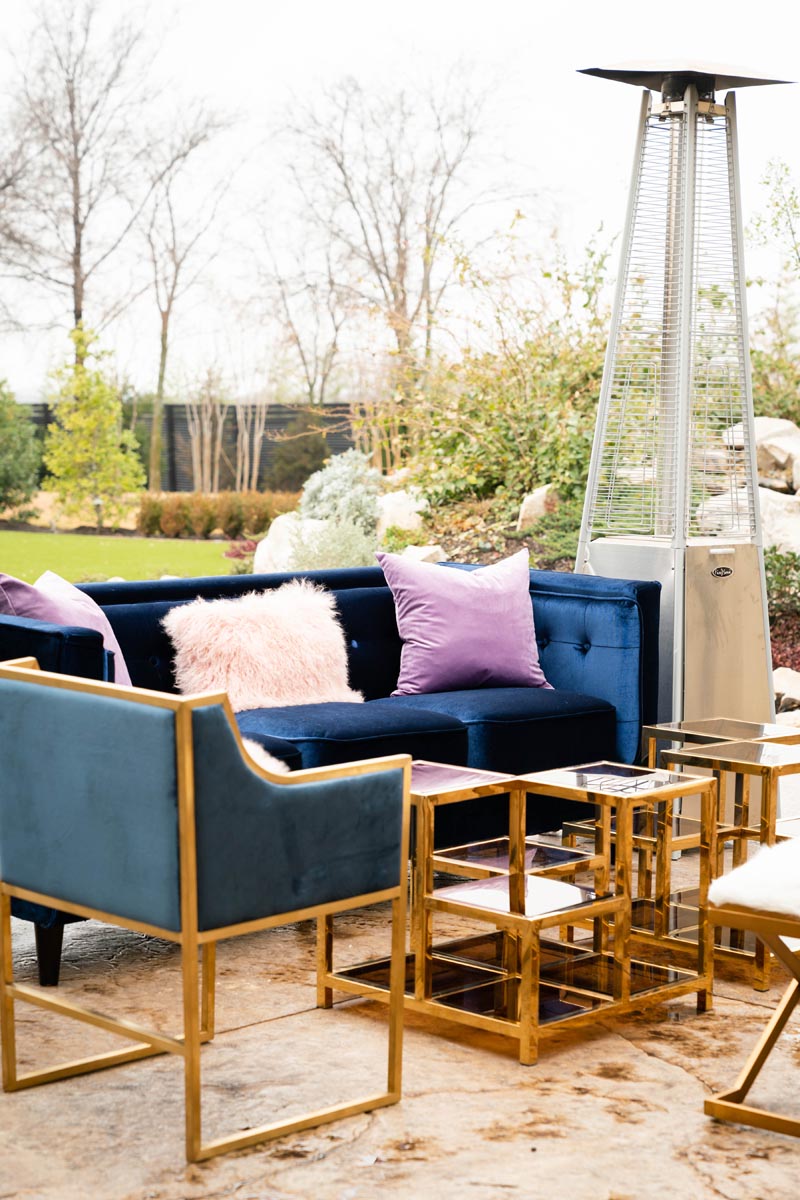 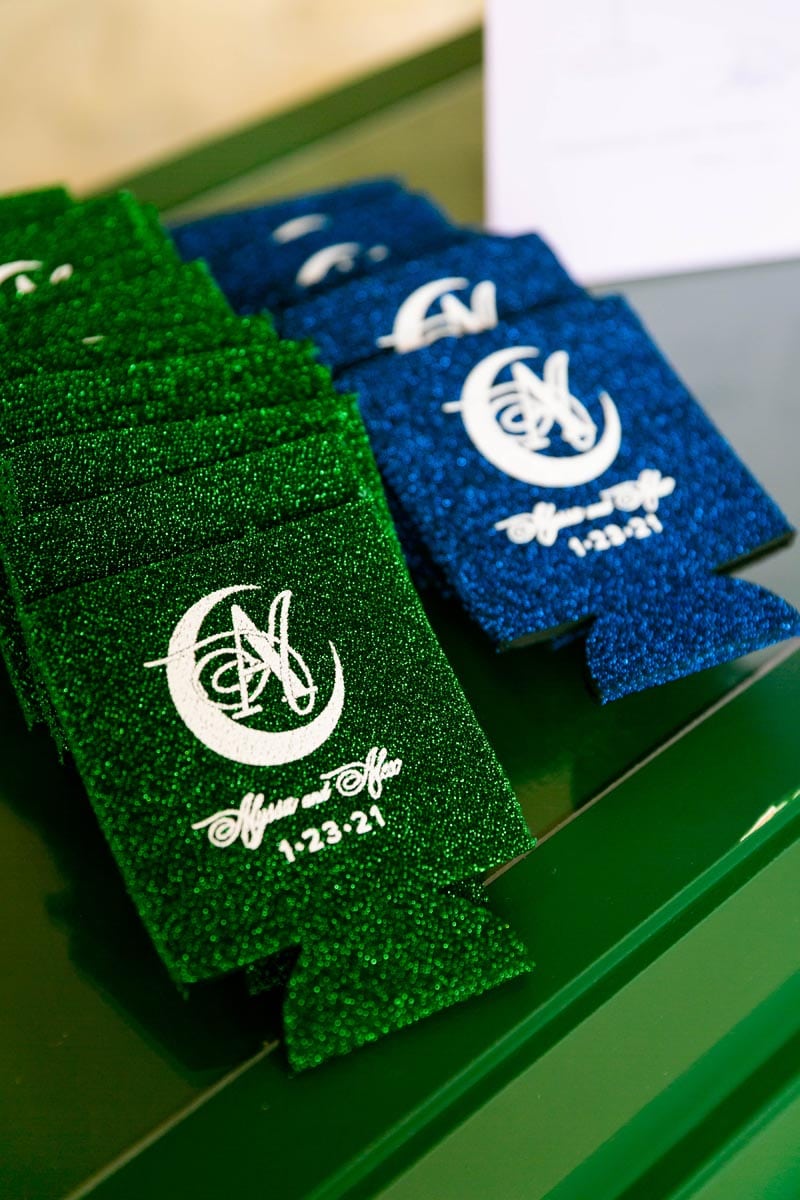 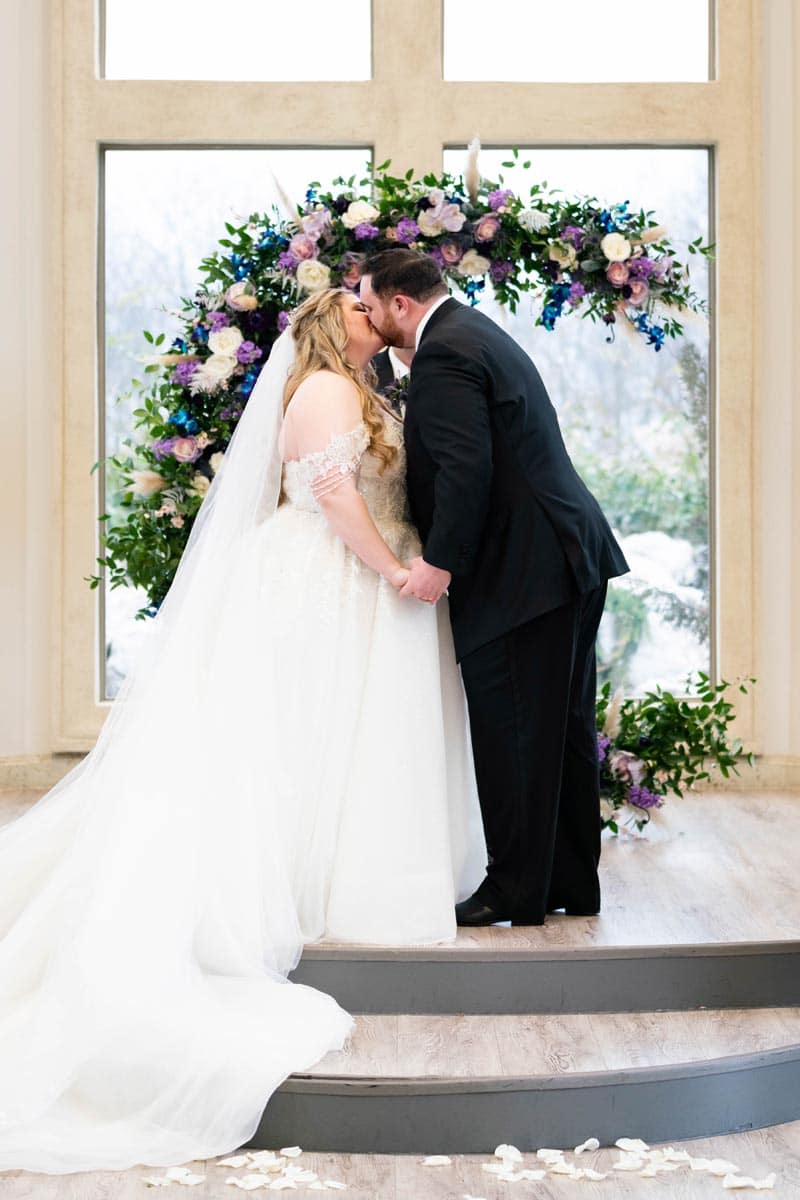 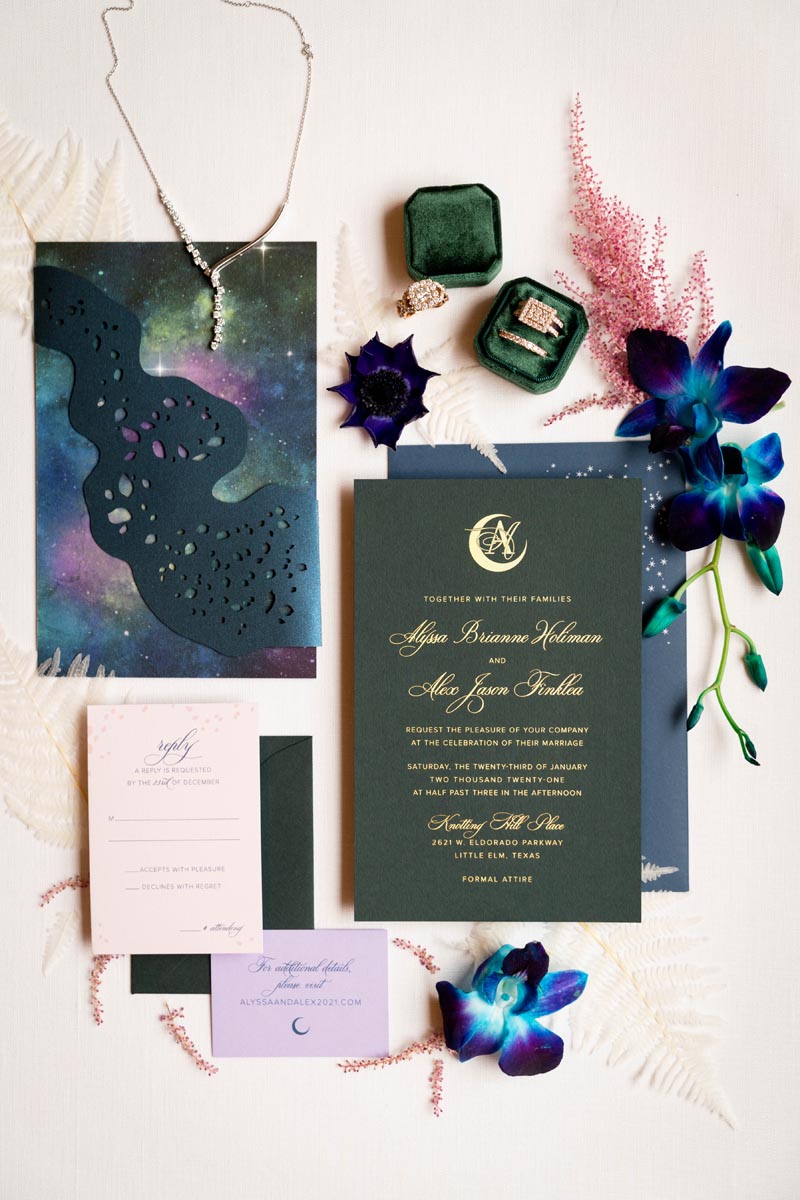 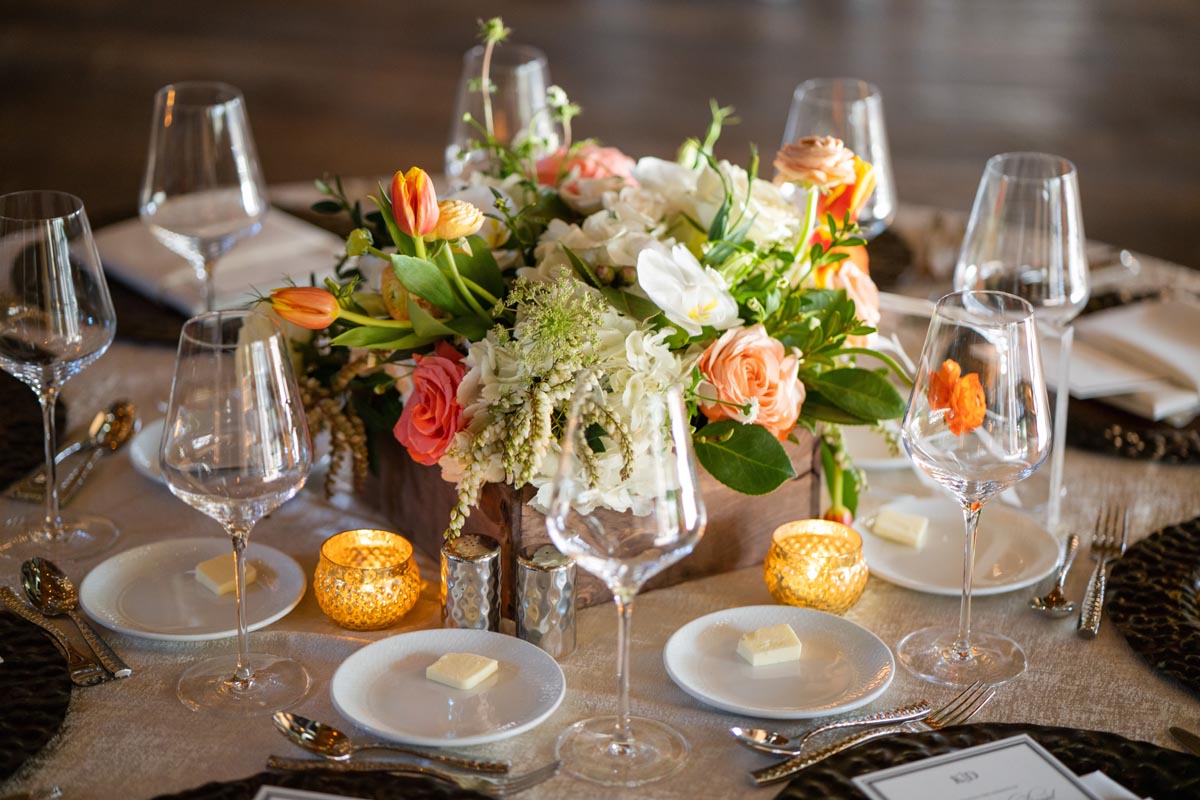 Alyssa had seen their venue on Instagram during the construction phase and fell in love with the French chateau vibes and felt that the layout of the venue was perfect for the type of wedding they wanted to have. The rest of their theme was inspired by the anime franchise Sailor Moon. They created an atmosphere of an ethereal garden/moon kingdom. Their main colors were emerald and sapphire and complemented those colors with lavender, blush pink and ivory.

They designed their stationary with Southern Fried Paper and alluded to the Moon Kingdom theme. They created a custom monogram with two A’s surrounded by a moon, similar to the Sailor Moon logo. Their cake, which was inspired by the Moon Kingdom and the Fountain of Dreams from the Kirby video game, had a metal fabricated spiral of “floating florals” and was set on top of a clear stand with water pouring out of it. There was a large floral moon gate that was designed for their altarpiece. Their tablescape centerpieces consisted of a large topiary with a floral spiral wrapping it, a clear candelabra with a spray of flowers complimenting the bottom and a tree with various florals peeking through. Greenery sprawled over the railings and the main staircase. The bouquets all consisted of the same flowers wrapped in various complimenting silk colors at the stems.

After the main procession, the doors closed prior to Alyssa entering the ceremony space. A backdrop of two 6ft tall wings that were made of flowers were turned to face the guests and Alex. As the doors opened for Alyssa to walk in, the planning team moved the wings to reveal Alyssa to the room. Alyssa’s favorite piece of decor was the Alicorn statue that a company called Stage Works helped to design, inspired by the Pegasus and the character Helios in Sailor Moon. The statue was covered in moss and then enhanced with florals under the wings and in the mane. The statue stood 7 ft tall and was drilled into an iridescent sparkly white stand.

Alyssa had three dresses. Her ceremony gown was a custom white Estee Couture ball gown with a sweetheart neckline and detachable sleeves dripping in beading. Her reception gown was a form fitting Van Der Velde A-line gown, covered in lace. Her third dress was an off-the-shoulder ivory lace gown from Torrid. She wore this as an exit dress as well as for their private last dance. Alyssa paired this with a white fur cape during the exit. Alex also had a wardrobe change, trading in his ceremony tuxedo jacket for a velvet, dark green jacket for the reception and the exit. Alex custom designed Alyssa’s engagement ring at Jared and they then custom designed their wedding bands together to compliment the engagement ring.

Alyssa’s bridesmaids wore dark green dresses that would be complimentary on all of their skin tones. She wanted everyone to have a hairdo that was half up/half down romantic curls with a braid. Alyssa gifted each of her girls with a pair of gold flats and a jewelry set. Ultimately, the inspiration was for Alyssa to be Sailor Moon and her girls to be the other sailor scouts.

For their big exit, Alyssa and Alex wrapped themselves in capes and ran through a “snowstorm,” created by Harmland Visions, to their black limo that was waiting for them. 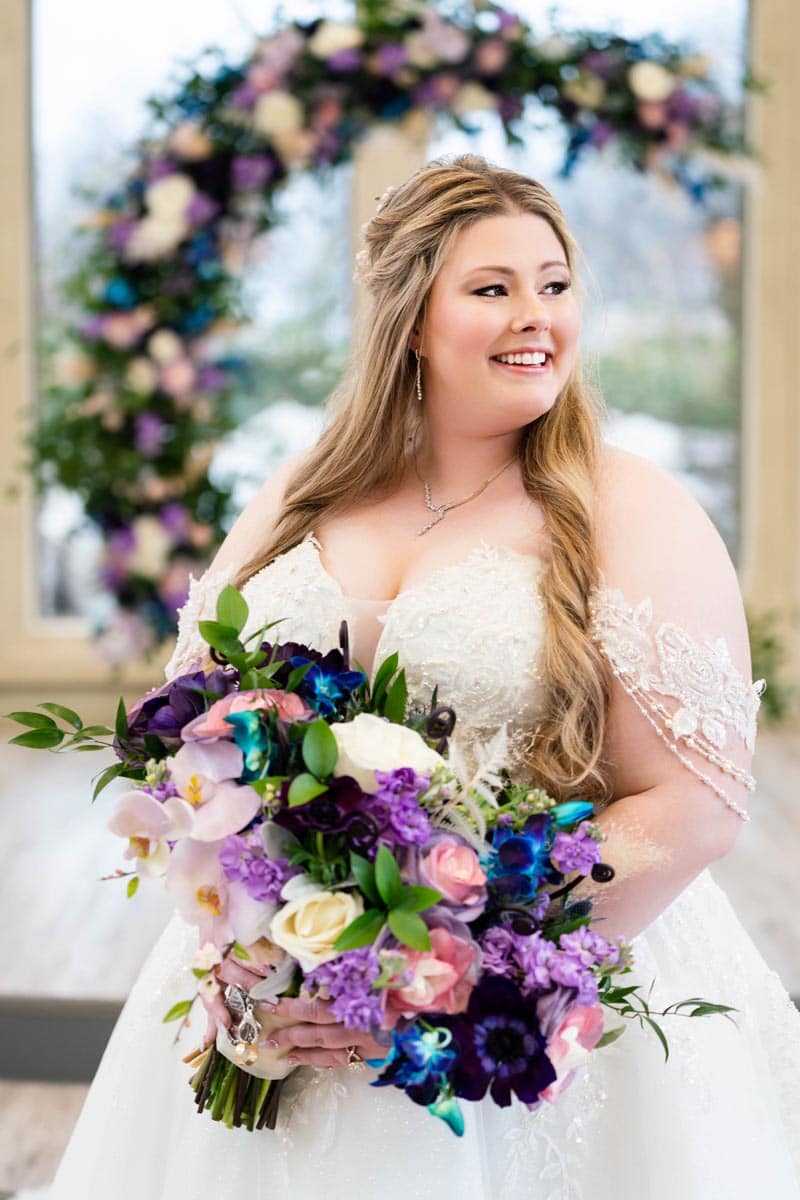 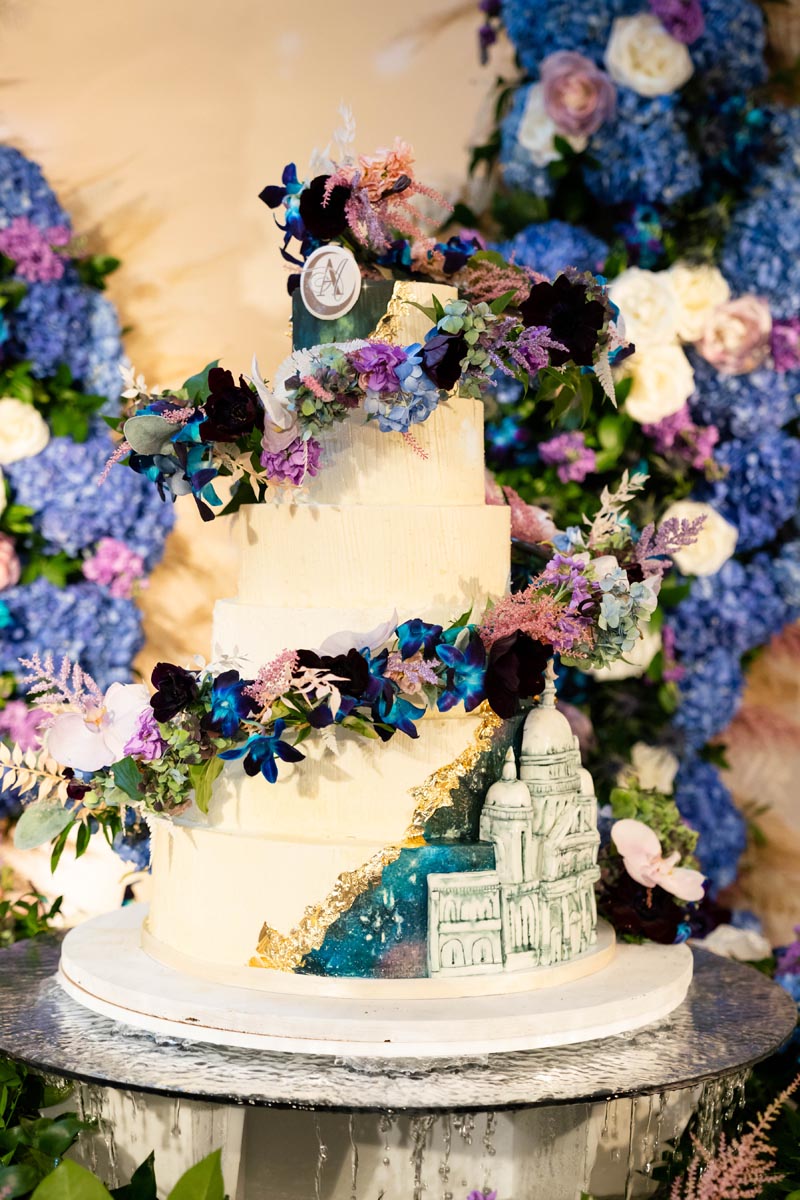 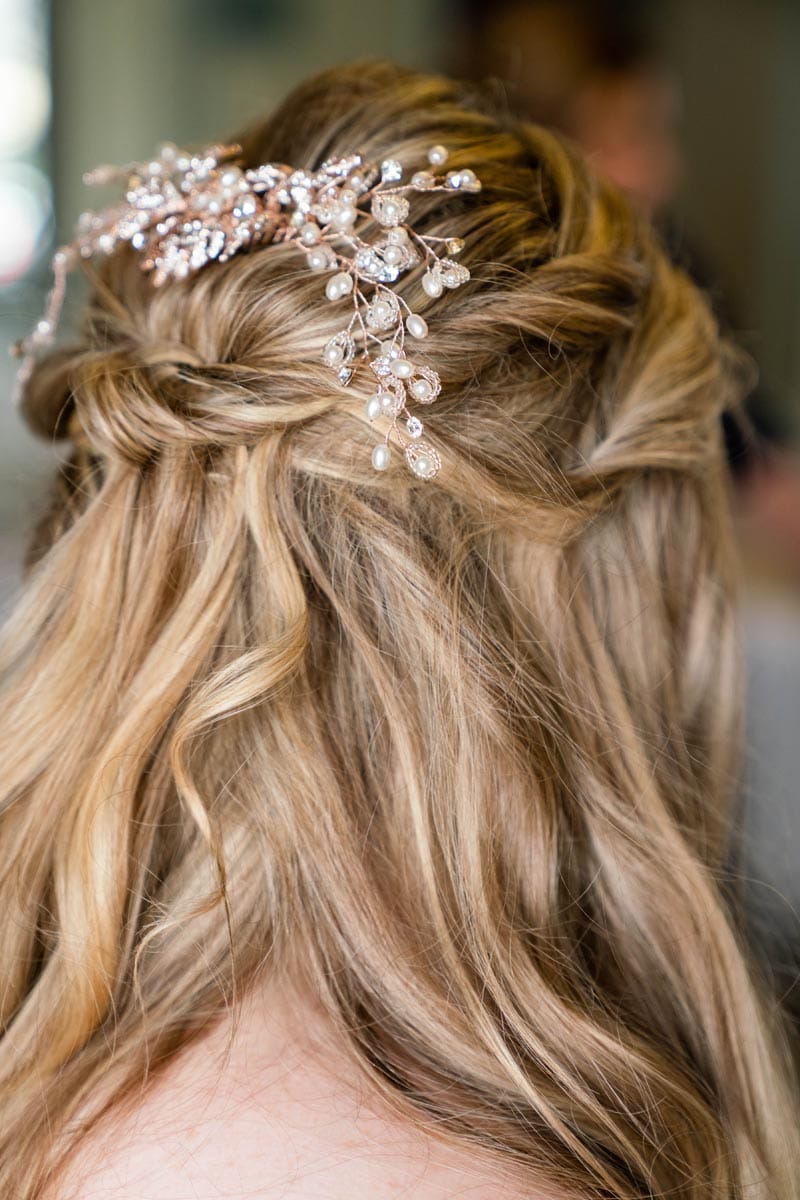 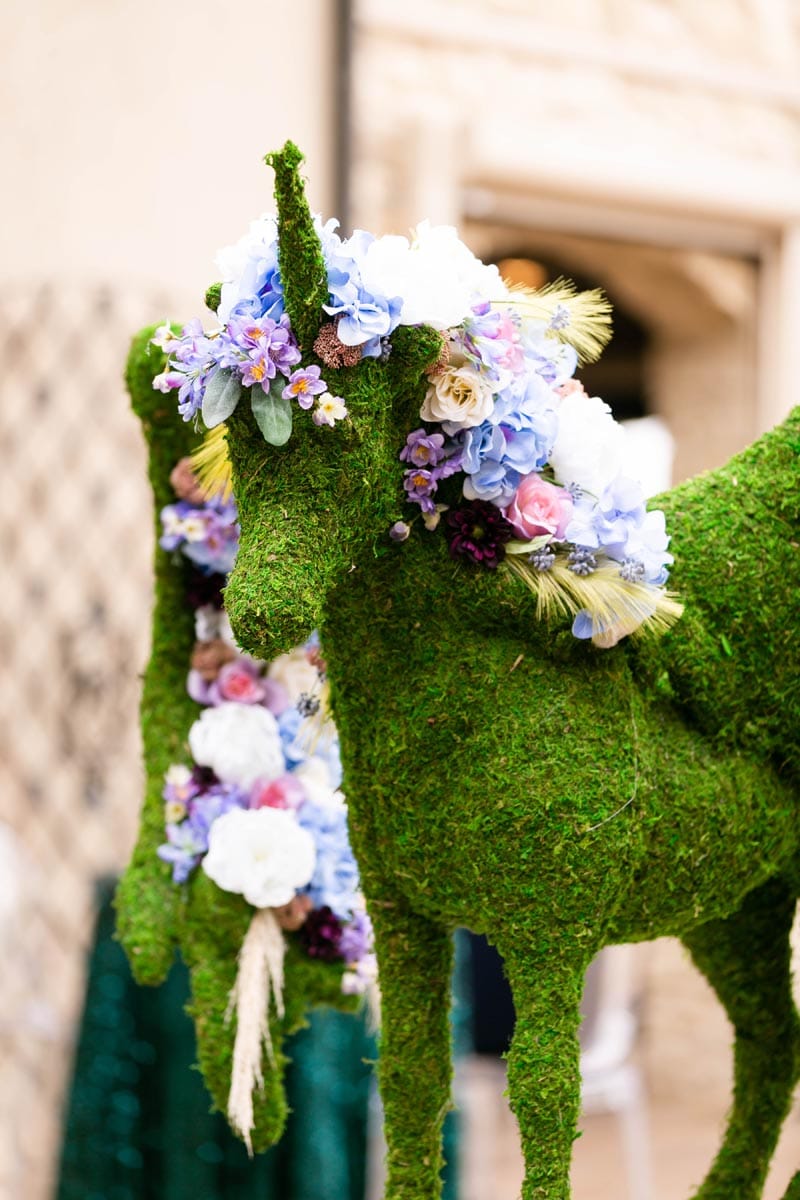 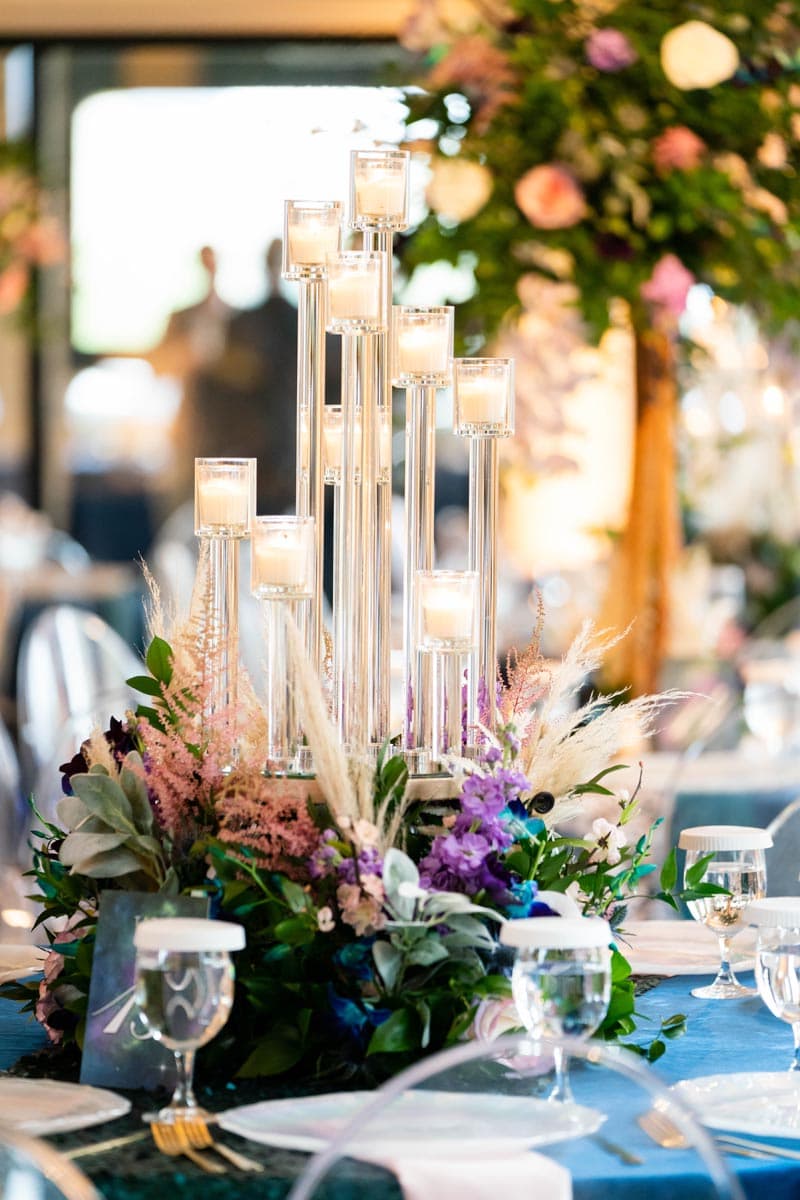 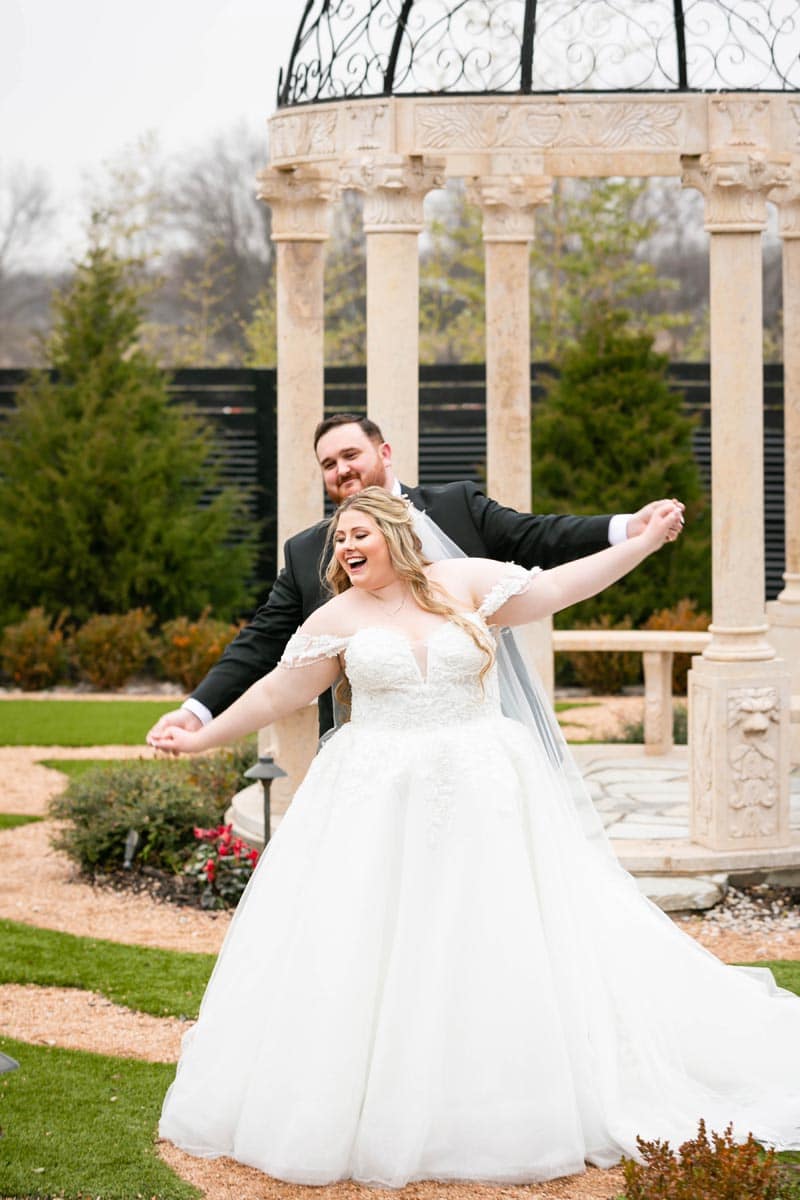